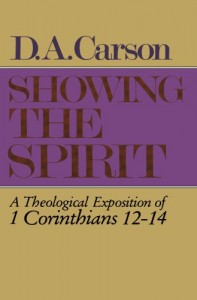 In D. A. Carson’s wonderful book, Showing the Spirit, he has these fascinating words:

“One begins to suspect, then, that prophecy may occur more often than is recognized in noncharismatic circles, and less often than is recognized in charismatic circles. We may happily agree that preaching cannot be identified with prophecy, but what preacher has not had the experience, after detailed preparation for public ministry, of being interrupted in the full flow of his delivery with a new thought, fresh and powerful, interrupting him and insinuating itself upon his mind, until he makes room for it and incorporates it into his message—only to find after the service that the insertion was the very bit that seemed to touch the most people, and meet their needs? Most charismatics would label the same experience a “prophecy.”

Similar things could be said for many of the other “charismatic” gifts. Healing is not restricted to charismatic circles. (I could mention some remarkable answers to prayers for healing among other groups.) I have myself experienced what would in other circles be called “the gift of faith,” in which I was given utter assurance that certain things would take place, even though the prospect flew in the face of normal, prognostications and stood removed from the kinds of promises normally associated with the gospel and its demand for faith. The wife of a Baptist minister, a close friend who serves in a noncharismatic environment, has been praying in tongues in her private devotions for years—ever since as a teen-ager she found herself able to do so, without any contact with (what was then) Pentecostalism. With little effort, I could provide many interesting examples of the utilization of “charismatic” gifts in decidedly noncharismatic groups.”(168–169)

I appreciate Carson’s thoughts here because it’s helpfully cautious. Having been in both charismatic and non-charismatic churches, I can attest to what he’s getting at. I’m certain that much of what happens within Pentecostal/Charismatic churches isn’t always the work of the Spirit and I’m equally convinced that there is a lot more charismata happening in churches that do not realize it!

Kind of reminds me of a Baptist church I was in once that had several people go forward and “share their heart” to the church with really great messages that built up, strengthened and consoled people. They called it “sharing from their heart” whereas I think Paul called it “prophecy” (cf. 1 Cor. 12:3).

I won’t split hairs and get into an argument of semantics here. I just think it’s neat to see a bridge between these two types of churches existing, far more often than we may understand or agree!