Reza Aslan’s new book, Zealot: The Life and Times of Jesus of Nazareth 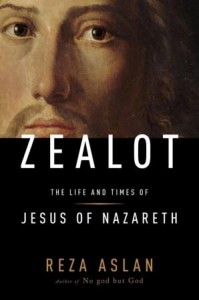 I keep getting asked, “Have you read Reza Aslan’s new book on Jesus?” No, I haven’t. And I don’t plan on reading it. I flipped through it and found the same old ideas that have been suggested in certain wings of “scholarship” that have been overturned time and time again. Aslan’s book doesn’t provide anything all that impressive and makes some bold claims with absolutely no supporting evidence (e.g., Jesus wasn’t born in Bethlehem!!). I’m inclined to agree with Craig A. Evans, a leading expert on the historical Jesus, who recently wrote:

“Lots of flap about a new book by Reza Aslan, Zealot: The Life and Times of Jesus of Nazareth, so gave it a read. I don’t see this book as a Muslim’s bashing of Christianity or of Jesus. It is simply a creative piece of writing; a personal interpretation by a someone who is not an expert in the field, but who knows some of the scholarly literature, advances an old perspective (i.e., Jesus as a zealot of some sort), and in general lacks sophisticated nuance.

My criticism thus far is that Aslan doesn’t always have sophisticated control of the scholarship, opting for some of the extreme or eccentric views. At times his interpretation of some of Jesus’ sayings (such as taking up a sword) apparently fails to perceive the metaphor or hyperbole that is intended.

This book will make no significant or lasting contribution to the scholarly discussion of Jesus.”

Boom. If Evans says that about your work, you should just pack up and go home. Ha ha! Like Evans, this has nothing to do with whether or not a Muslim should participate in scholarly discussions related to Jesus or Christianity. I think they can and should. The issue is the substance of Aslan’s book!

Two other views are helpful: First, Anthony Le Donne’s is hilarious. It lays out a number of the vastly defficient areas of Aslan’s book. Second, biblical scholar Greg Carey wrote a response too.

So for all of you Facebook friends who are asking me if I read the book. The answer is “no.” I don’t foresee myself reading it because I can find his arguments in much better books and since those arguments have been proven false, there’s not much of a reason to read it except to fit in with our culture’s obsession with religious controversy.

And for the record, the Fox News interview of Aslan, by Lauren Green, was ridiculous, embarrassing, and exactly what shouldn’t happen by the media.