You can’t really talk about the Protestant Reformation without thinking about Martin Luther, right? And even though he stood on the shoulders of others who went before him (Tyndale, Wycliffe, etc.), he most assuredly changed the world. Europe was not the same after Luther, both the landscape of Christianity and the landscape of society.

Thus, Lutheranism has become one of the main branches of the Christian tradition and finds representatives throughout the world. From North America to Australia, Luther’s theology has impacted people’s understanding of the Christian faith in many ways. Be it positive or negative, people have opinions on Martin Luther!

A lot of people think that the 95 Theses contained Martin Luther’s ninety-five problems with Catholicism and that it addressed the priesthood, sacramentalism, the Mass, Christ’s Atonement, Marian doctrines, and more. But that’s not the case. The 95 Theses was simply Luther’s comments on the subject of indulgences. An indulgence is full or partial forgiveness of the punishment for sins, often associated with the Catholic doctrine of purgatory. Luther’s response was likely connected to the selling of indulgences by Johann Tetzel, who was commissioned by Rome to raise funds for the rebuilding of St. Peter’s Basilica. It might be helpful to mention that the 95 Theses’ full title was Ninety-Five Theses on the Power and Efficacy of Indulgences.

If we are going to understand the young Luther, than we need to come to grips with the fact that Luther did not intend to start Lutheranism. Nor did he intend to cause a schism within the European church. His goal wasn’t to become the “father of the Protestant Reformation” by any means.

So what was his goal? Well he actually clarifies his initial purpose when he introduced the 95 Theses. He writes,

“Out of love and zeal for truth and the desire to bring it to light, the following theses will be publicly discussed at Wittenberg under the chairmanship of the Reverend Father Martin Luther, Master of Arts and Sacred Theology and regularly appointed Lecturer on these subjects at that place. He requests that those who cannot be present to debate orally with us will do so by letter.” 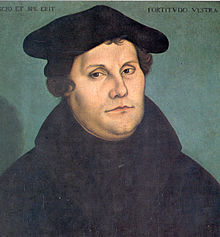 “Out of love and zeal for truth… the following theses will be publicly discussed…” The young Luther was on a theological journey that sought to love and be zealous for truth! And what’s important to note is that Luther did not intend to do anything but “do theology in community.” In other words, the invitation was to “come and discuss.” It wasn’t a heavy-handed theologian seeking to dictate to others what truth was. It was a young Luther searching and discovering on his quest for truth.

There’s much that we can learn from this. For Luther’s journey began with these ninety-five ideas centered on indulgences but led to his writing of On Christian Liberty (1520), the infamous On the Bondage of the Will (1525), and other books and a host of published sermons. The quest for truth led to a prolific output of theological works.

But for me, what I gain from the young Luther, as opposed to the later Luther, is that there was a willingness to discuss theology and doctrine with others. In fact, there was an open invitation to do so!

Later, Luther tended to become a bit more “heavy-handed” when it came to theological disputes. It seems he forgot that not everyone had gone through the journey quite the same way that he did! In fact, Philipp Melanchthon, Luther’s “right hand man,” was a bit more like the young Luther. He was more open to discussing theological differences and working things out. Matthias Flacius, and the Gnesio-Lutherans, took the older Luther’s perspective and sought Christian fellowship only if people agreed on everything.

Sadly, no one showed up to talk to Luther in 1517. But Luther still loved truth and was zealous for it.