Did God Give Authority to Men Beyond the Ministry of Jesus or Just to Jesus: Rethinking Matt. 9:8 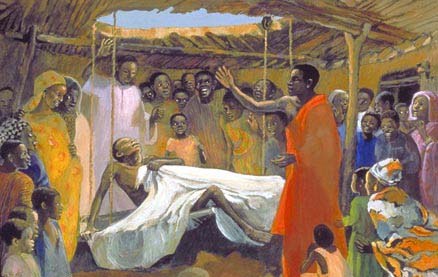 There are some difficulties in how we interpret Matthew 9:1-8, the passage on Jesus healing the paralytic. Let’s go over what isn’t difficult before we cover what is difficult, or at least presents some obstacles.Verses 1-8 describe how after Jesus returns to Capernaum in Galilee, some concerned friends of a paralytic (paralytikon, a lame person) bring that person to Jesus. Jesus saw the faith, most likely, of the concerned friends since the “the spiritual state of the sick man remains unspecified” (Blomberg, Matthew, p. 153) and, being aware of their faith, says to the lame man, “Take heart, my son; your sins are forgiven.” Scribes overhear this and said to themselves that Jesus was blaspheming. Jesus reads their mail and considers their doubt to be evil (v.4). He then asks a rhetorical question – “For which is easier, to say, ‘Your sins are forgiven,’ or to say, ‘Rise and walk’?” There’s no doubt the scribes were probably dumbfounded that Jesus knew what they were thinking and as they were contemplating how to respond, Jesus goes on and states that to show that he had “authority on earth to forgive sins,” he told the lame guy to get up, get his bed, and go home.” The man immediately obeyed by getting up, getting his bed, and going home. End of non-difficult section.

Then we have verse 8. Verse 8 is where the difficulty comes in. Matthew writes that “when the crowds saw [Jesus heal the man], they were afraid, and they glorified God, who had given such authority to men.” The difficulty is in how we interpret “ton donta exousian toiautên tois anthrôpois.” There is little doubt that the authority to forgive sin and heal is simply Jesus showing that sin can be connected to sickness and that the most important concern for Jesus is the spiritual health of a person. This is not to be understand as undermining the importance of physical healing but to help us guard against missing the forest by concentrating on the tree. In other words, what’s the overall concern? That man need be reconciled to God by faith in Christ who has power to forgive sin. Yes, I know this is not there in the text, but you get my point.

Matthew’s statement is that such authority was given to men (plural, anthropois). Does he intend for us to think that the people in Capernaum believed that this authority to bring forgiveness of sin and physical healing was given to men in the sense of only Jesus or in the sense of an aspect of the Church. In support of the view that this verse is only about Jesus, Morris writes,

“Some understand authority in terms of power (KJV translates the word here as “power”), but it is not so much naked power as power rightfully exercised that is in mind. That the authority is given to men does not mean that any person can do what Jesus had just done. There is not the slightest indication that anyone in the crowd thought that. Rather, the thought is that God has been pleased not to keep the power in heaven, but to give it to people here on earth in and through Jesus.” (Leon Morris, The Gospel According to Matthew, 217-18)

Morris’ point is well stated and, I think, does hold some weight. There is a uniqueness to Jesus and His earthly ministry. Jesus healed everyone that He prayed for and He constantly demonstrated the power of the Kingdom. We would do well to remember the centrality of Christ. Yet Morris’ view need not be were we stop because the way in which we see this concept being fleshed out through Matthew’s gospel shows that the application extends beyond Jesus, though never apart from Jesus. Despite needing to consider the most natural reading of the text, we need to consider the progressive extension of Jesus authority as it is revealed throughout Matthew’s gospel. Consider the following:

Matthew 9:8 is not as difficult to understand in light of Matthew’s continued record. Jesus gave authority, kingdom authority, to His followers. Thus, commenting on v.8, one scholar writes,

“[It] almost certainly… anticipates the developing situation in which the Christian community comes to participate in and to continue to benefit from the authority demonstrated here by Jesus” (John Nolland, The Gospel of Matthew : A commentary on the Greek text, 383).

The entire point of the verse, in my opinion, is that Matthew is showing the continuity between Jesus’ ministry and authority and the Church’s ministry and authority. There’s no doubt that there’s a central Christological focus that is emphasizing that Jesus alone has the authority to to both forgive sins and to heal the sick. The amazing thing is that Jesus still ministers in this way through the Holy Spirit empowered Church! His followers participate and continue His ministry!

Step 1: transition into a church’s leadership by lying & manipulating.

Don Williams passed away a couple weeks ago. If you are charismatic, you should know about him as he was a HUGELY influential pastor theologian.

I presented a paper on him back in 2016 (https://lukegeraty.com/2022/10/05/don-williams-shaping-the-theology-praxis-and-culture-of-worship-in-the-vineyard-and-beyond/), noting six doxological commitments he had… and here they are…

The BEST exegesis and corresponding application of 1 Cor. 11:27-29’s “honoring the Body of Christ,” is hands down Gordon Fee, which suggests the focus is about honoring the people of God, not the typical interpretation of Closed Table advocates.

My “run for the hills” ecclesiological meter goes off when it’s obvious that systems, structures, ministries, and/or SACRAMENTS are used to control, manipulate, oppress, or maintain power.

And my reading of history indicates this is a widespread issue.

Been listening to a podcast on the Kansas City Prophets… John Wimber is mentioned a lot. I kind of need to get back to some Wimber projects I was working on. So much fun stuff to read and watch!