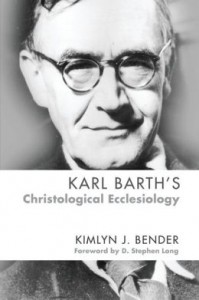 There’s been a lot of talk about Karl Barth around here at ThinkTheology.org… mostly because Able Baker is doing Wednesdays with Barth through LOGOS Bible Software (introduction here and why you should read Barth here). Prior to Able getting on the Barth bandwagon (just kidding!!), I requested a copy of Kimlyn J. Bender’s Karl Barth’s Christological Ecclesiology (KBCE). After all, Barth’s gonna be a big deal around these parts for awhile and since I love ecclesiology, I thought this would be a good fit.

KBCE is Bender’s revised doctoral dissertation and anyone who follows Bathian scholarship will be familiar with his work since he’s published on Barth in numerous books and journals (consult is CV for details). Bender notes in the introduction that many missteps have occurred when attempts to understand Barth’s ecclesiology are taken up. Being that Barth didn’t finish Church Dogmatics before his death and that we don’t have his focused attention on the matter, it’s understandable that many have missed Barth’s thoughts on the matter. Bender is just the person to help us along the way.

Bender’s work is quite impressive. I’m not exaggerating when I say that I read his introduction twice. I found it so thoroughly helpful in understanding Barth in general that I had to digest it’s content twice. For example, Bender writes,

“For Barth, to consider and formulate a Christian doctrine in isolation from the revelation given in Christ results in an abstract doctrine that has lost its moorings and can be regarded only as speculative.”

Herein is why I was first interested in Bender’s work. To talk about Barth requires one to think christologically. According to Bender, Barth believed that “every Christian doctrine must be determined in light of the particular person of Jesus Christ, and this holds true for ecclesiology.”

KBCE is a combination of both historical and theological work. Bender spends time extrapolating Barth’s early ecclesiology (noting his early struggles with Liberalism and his interaction with Roman Catholicism) as well as Barth’s later (“Mature”) ecclesiology. This is fascinating for a number of reasons.

First, though Barth has become somewhat of a superhuman theologian, Bender places him squarely into the category of “human.” While I’d agree that Barth is one of the greatest Protestant theologians of the twenty-first century, he wasn’t divine. Bender demonstrates conclusively that the young Barth’s ecclesiology developed and matured. This is, quite frankly, one of the reasons why I believe Barth is one of the greats – he never stopped learning or thinking.

Second, it appears that Barth, like Bonhoeffer, developed some of his ideas due to his experience as a European theologian living during both World War 1 and World War 2. Though this is not the primary focus of KBCE, it is an important feature. This is scene in how Bender makes the following statement:

“Just as Barth rebelled against the previous cultural religion of liberalism with its individualism, so he rejected this new volkisch religion of nation and race. Barth did not embrace the Volk as the defining Christian sphere of activity, and as his colleagues turned toward this concept of the Volk, Barth turned increasingly toward a new understanding of the church, implicitly evident in his newly titled Church Dogmatics and explicitly witnessed in the Barmen Declaration…“

This raises an important point. Barth’s early Göttingen Dogmatics matured into Church dogmatics. Barth’s rejection of the political emptiness found in the nationalistic Volk was challenged in his commitment to, as Bender explains, christological ecclesiology. This is a huge subject to consider when thinking about Barth’s ecclesiology.

Third, Barth’s development in the area of pneumatology is intriguing, as reported by Bender in chapter six, “The Origin of the Church as the Fellowship of the Spirit.” Bender translates/interprets Barth on the Spirit and the Church as follows:

“The Holy Spirit’s work remains inscrutable yet real, the basis of the existence of the Christian community in time and the revelation of the church’s true identity. The true nature of the church is therefore that of a reality that exists in time though its origin and basis lie outside of history in the Spirit’s call.”

Bender notes that Barth’s own comments on the Spirit and the Christian community, as found in Church Dogmatics IV.1, “raise more questions than it answers.” This is what intrigues me most about Barth, and perhaps that is why I find dialectic theology such a helpful way to stimulate theological reflection. Barth’s work on the Spirit is a great place to begin to dialogue, and Bender helps that conversation. Of course, it would have been much more helpful if Barth had completed a section on ecclesiology in Church Dogmatics that addressed this issue specifically, but I digress.

If Simon Chan’s statement that ecclesiology is “one of the least developed areas of Protestant though, especially among evangelicals” is true, evangelicals would be wise to consider and evaluate Barth’s work (readers will hopefully note that this review does not critically evaluate Barth). As Bender notes in closing, Barth’s ecclesiology was self-identified in a way that led him to conclude that it could have left him in “theological and ecclesiastical isolation.” As with much of his theology, Barth “continues to swim against the stream.” Pick up a copy of Karl Barth’s Christological Ecclesiology and you’ll find a meaty engagement with Barth in a way that encourages discussions about the relationship of the Spirit and ecclesiology as well as a guide in reading Barth. Though Bender’s work is far more focused than what we have gone on here at ThinkTheology.org, I’d suggest that anyone looking to read Barth should pick up Bender; he’s a great guide….

Pick up a copy of Karl Barth’s Christological Ecclesiology through Wipf and Stock Publishers or Amazon today!