Yes, I Use My iPad on Sunday Mornings 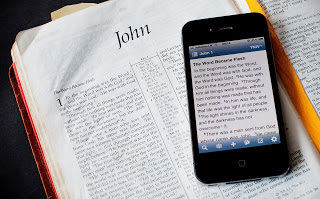 A few weeks ago, Matthew Barrett wrote a blog at TGC called, “Dear Pastor, Bring Your Bible to Church.” Barrett basically argued that pastors shouldn’t use electronic Bibles but should use hard-copy paper versions. He lays out a number of reasons behind his opinion, including his view that it sends the wrong message, adds to biblical illiteracy, and lacks the effectiveness of hard-copies.

As you probably guessed, I am not convinced by all of his arguments. I do, however, think that his concerns should be considered! I just don’t think it is as black and white or clear cut as he seems to assume. I’m inclined to think there are a variety of factors that could play into the decision to use an electronic Bible versus a hard-copy and vice versa. Not everyone is guilty of the concerns that Barrett has expressed. One of my biggest concern is that is seems to overlook the very nature of Scripture and it’s effectiveness by the Spirit as well as translation issues. I think Michael Bird makes some of these very points in his excellent parody, “Dear Presbyter, Bring Your Scroll to Church.”

For my part, I actually use both a hard-copy Bible and my iPad. I used to only use my hard-copy Bible when preaching on Sundays, but the more that I became efficient with my iPad, the more that it seemed effective to use. Plus, and this is an admission that I hate even admitting, my eyes really like that I can make the font bigger on my iPad! Furthermore, for me, the power of God’s Word is not found in whether or not it is on a piece of paper, a scroll, tattoo’d on someone’s back, or on a digital device. The power of God’s Word is unleashed by the Holy Spirit’s inspiration and divine “highlight.”

I rather doubt that Barrett would disagree about the power of God’s Word. I think he and I would probably agree on that issue. I’m just not as convinced that his opinion should become a black and white standard for all pastors/preachers. I’ve had numerous conversations with people about Jesus, the Gospel, and my faith as a direct result of reading Scripture right on my iPad. I’ve also seen a great host of people move from using their digital devices primarily for entertainment purposes to begin using them to read God’s Word more. Furthermore, I’m convinced that John Piper’s statement that “the Bible is about to threaten your smartphone focus” was spot on.

My point is that I think it’s a bit more nuanced than a simple “yes” or “no.”