“Battling” is essentially one of the most common expressions by way of the four elements of hip hop culture (emcee’s, deejays, breakdancing, and graff art). Battling is a mainstay of hip hop and you’d be hard pressed to find a hip hop event that does not include some form of battling. You cannot underestimate how important battling is within hip hop culture.

I spent a lot of time taking part in hip hop battles as an emcee. I attended many DJ and breakdancing battles and have seen some amazing graff art, but I’m primarily thinking about this from the perspective of emceeing. And I’m thinking theologically too.

So how should a Christian think about this subject? Is battling important enough to hip hop culture to be intrinsic and must remain? Or is it evil? What about Christians who participate in hip hop culture? 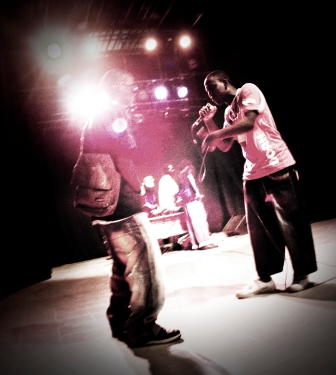 Others practice what I’ve heard called “reverse battling” or “freestyle blessing,” among other names. Advocates of this view, in an attempt to “redeem culture,” judge that battling is essentially too prideful and too negative to be beneficial for Christians to participate in. Yet the idea of “competition” (think along the lines of “respect”) is important to maintain, so some form of competition must take place. So why not “reverse” the negative battle and make it a competition of outdoing the other with positive statements. At least that’s the general thinking behind such a view.

Still others believe that no Christian should be involved in these types of competitions because the very foundation of the issue is one of pride. Advocates of battling are wrong because they are taking part in a negative expression of prideful boasting and advocates of “reverse battling” are wrong because there’s still an element of pride involved because the desire is to be better than others. This group tends to say things like, “Christians are not of the world” and judge participation in any form of battling as sinful.

There are other views too, and I’m generalizing a lot too. But since most of my readers are either not involved in hip hop culture or unfamiliar with most of these ideas, I’m trying to “break it down” for you.

I think there are flaws in some of these ideas and I also think that advocates of each perspective should take more time to think about this subject, and reflect upon it from a biblical and theological perspective as well as noting the missional importance of such a question.

Here’s a few random thoughts I have:

First, the hip hop culture, as a whole, is going to always include battling as an essential part of it’s expression. Having performed at and attended literally hundreds of shows, I think it’s safe to say that battling will not cease to exist. I think it is intrinsic to the art-form and expressions of hip hop. And if it wasn’t intrinsic before 2002, Eminem made it so when 8 Mile was released. End of story. And I think it is a waste of everyone’s time to try and convince non-Christians to stop battling because it is “wrong.” You can’t force other people to live out your own ethics, faith, or viewpoints, can you? I don’t think so.

Third, the concept of “reverse battling” sounds really cheesy. I know that might be a bit harsh, but my experience with non-Christians leads me to conclude that this is the case for 99% of those who first hear about this. Plus… it’s just plain cheesy. Okay, that’s not a great reason for being opposed to it, but I think it’s an important point to consider. In an effort to be “biblical” and “relevant,” Christians often “christianize” things to a point where they are no longer “biblical” or “relevant.”

Fourth, not everyone who participates in battling is doing it out of pride. There are some emcees who are genuinely trying to engage those in the culture by way of emcee battles. This is difficult as it’s all spontaneous and whatever comes to mind, but there’s a genuine desire from these folks to engage others through this medium. So the automatic judgment of “all battling is evil” is ridiculous because it’s simply not true.

Fifthly, related to my thoughts on “reverse battling,” I think the language of “redeeming culture” needs to be nuanced and often a bit more thoughtful (consider Carson’s thoughts). In Scripture, redemption is generally applied to people and the concept of “redeeming culture” can give the impression that the gospel is an assumption and that influencing the culture by way of either shaping it and legislating it is the most important work in the Kingdom. This isn’t everyone, but is a concern to consider. I’m in agreement with the concept of “redeeming culture” when it acknowledges that culture also desperately needs to be transformed by way of the gospel.

Sixth, competition is not automatically rooted in pride. The Apostle Paul essentially created a little “friendly” competition between the Corinthians and the Macedonians revolving around financially supporting the needs of the church in Jerusalem (cf. 2 Cor. 9:1-6). So it’s a logical fallacy to automatically assume that competition is rooted in pride and I’m sure that there are people who participate in battling for the simple fun of it and to sharpen their own skills as they are challenged by others. My dad always told me that I’d become a better basketball player if I played against players that were better than me. I think this can be true about battling.

And finally, Proverbs 27:17 states, “Iron sharpens iron, and one man sharpens another.” Advocates of battling used it all the time to prove their case and give “biblical support” for battling. I don’t think this does justice to the verse because it overlooks the meaning having more to do with type of interaction that is being described and with the fruit of that interaction. The Hebrew literally reads that a person “sharpens the face of another/friend.” So there’s a concern for the other person too. Rarely are those who are battling concerned with the good of the other person. Perhaps some are, but many are not. There is supposed to be education that occurs in this type of interaction, so let’s not overuse Prov. 27:17 as the primary defense for battling. It simply doesn’t work.

A lot of thought has to go into this issue, I think. It’s more complex than simply “being missional” and “conforming to the world.”

Have any thoughts or questions? Feel free to leave your opinions…