A Reformational Spar on Election: Lutherans & Calvinists Can Be Friends! 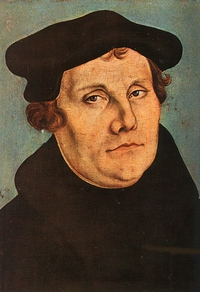 From time to time I find myself reading through sections of John Theodore Mueller’s Christian Dogmatics. Mueller’s contribution is basically a systematic theology from a confessional Lutheran perspective that some would consider ultra conservative. It’s doctrinally rich and stylistically about as dry as they come, but one of the reasons I enjoy reading it so much is because Mueller pulls absolutely no punches and has no problem making statements that clarify how committed to confessional Lutheranism he is. In other words, the theology found in the Lutheran tradition is orthodox and everyone else is heterodox. But fear not, “true believers may be found even in heterodox churches… as by the grace of God they still retain the fundamentals of the Gospel” (p.558).

At any rate, reading through his section on the doctrine of Election, I found an interesting quote:

“As a matter of fact, the right relation of faith to eternal election is this, that saving faith, wrought by the Holy Ghost, belongs into election as the means by which the object of election is accomplished. In other words, God in His eternal counsel of grace decreed to save His elect saints through faith in Christ Jesus, Eph. 1, 3-8; 1 Pet. 1, 2; or we may say, from eternity He graciously endowed the elect with faith and therby separated them from the lost world…” (p.598-9)

Boy, this sure sounds Calvinistic! In fact, the Westminster Confessional, perhaps the most popular Reformed statement of faith, states:

“Those of mankind that are predestinated unto life, God, before the foundation of the world was laid, according to His eternal and immutable purpose, and the secret counsel and good pleasure of His will, has chosen, in Christ, unto everlasting glory, out of His mere free grace and love, without any foresight of faith, or good works, or perseverance in either of them, or any other thing in the creature, as conditions, or causes moving Him thereunto; and all to the praise of His glorious grace.” (III.V)

“As God has appointed the elect unto glory, so has He, by the eternal and most free purpose of His will, foreordained all the means thereunto. Wherefore, they who are elected, being fallen in Adam, are redeemed by Christ, are effectually called unto faith in Christ by His Spirit working in due season, are justified, adopted, sanctified, and kept by His power, through faith, unto salvation. Neither are any other redeemed by Christ, effectually called, justified, adopted, sanctified, and saved, but the elect only.” (III.VI)

A lot of similarity between the Lutheran and the Calvinist, it appears. And as Mueller notes, this hasn’t been standard amongst a number of Lutheran theologians since Luther. It appears that a number of those after Luther took the route of stating that “God elected such as are saved in view of their foreseen final faith” (p.599). Interesting.

Of course, Mueller goes on to state, over and against Reformed Theology, that

So here’s my question. How do Lutherans who follow in the footsteps of Mueller exegete the texts that Calvin (and those following in his footsteps) found as supportive of election unto damnation (e.g., John 10:26; 12:37-40; Rom. 9:11-18, 22-23; 1 Pet. 2:7-8)? While it’s certainly possible that Calvinists may misinterpret texts of Scripture, to suggest that reprobation is “plainly repudiated” seems a bit misleading, especially since I find no interaction with those texts or those advocating such a position other than to dismiss it. Not a great way to interact on a theological topic, is it?

Regarding the will of God, Mueller suggests that the Reformed position offers a contradiction in God’s will, stating,

“Calvinism thus teaches contradictory wills in God; for by the outward call, extended to the non-elect, He wills their salvation, while according to His eternal degree of reprobation (horribile decretum), by which He reprobated the non-elect to damnation, He does not desire to save them” (p.607)

While I find this explanation of what Calvinism teaches as less than representative, Mueller does not interact with any of the Reformed advocates of what is commonly known as the “two wills of God” view (e.g., Calvin, Francis Turretin, Wilhelmus à Brakel, Jonathan Edwards, Herman Bavinck; HT: Jamin Hubner). In fact, it would appear that Mueller overlooks even Martin Luther, who wrote,

“God does many things which he does not show us in his word, and he wills many things which he does not in his word show us that he wills. Thus, he does not will the death of a sinner – that is, in his word; but he wills it by his inscrutable will. At present, however, we must keep in view his word and leave alone his inscrutable will; for it is by his word, and not by his inscrutable will, that we must be guided. In any case, who can direct himself according to a will that is inscrutable and incomprehensible?… So it is right to say, “If God does not desire our death, it must be laid to the charge of our own will if we perish”; this, I repeat, is right if you spoke of God preached. For he desires that all men should be saved, in that he comes to all by the word of salvation, and the fault is in the will which does not receive him, as he says in Matt. 23:37…But why the majesty does not remove or change this fault of will in every man (for it is not in the power of man to do it), or why he lays this fault to the charge of the will, when man cannot avoid it…as Paul says in Rom. 11: “Who art thou that repliest against God?” (The Bondage of the Will, Section 64).

But I really do like reading Mueller. It’s fun to read. I just wonder what would have happened if Luther and Calvin spent more time together… I think they would have really helped refine each other!