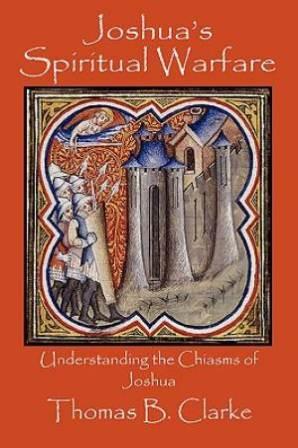 One of the most important skills that one should acquire with theological training is with reading and interpreting and applying Scripture. This largely boils down to asking the right questions about the text and making a lot of good observations. And as you spend time in Scripture and even study works that will expand your understanding of linguistic styles and and grammatical constructions, you’ll find out that our modern way of diagramming sentences is not as modern as we think. During the time periods where the Bible was written, authors utilized a style of writing known as chiasms in order to help readers notice the “big ideas” of a certain statement, passage, or even book of the Bible.

So seven months ago (has it been that long?!), when I wrote on the chiastic structure of Gen. 11:1-9, I was able to peak the interest of Thomas Clarke and he went on to send me a copy of his book Joshua’s Spiritual Warfare (Amazon) for review. If you are unfamiliar with what a chiasm is, Clarke’s book would actually do you a great service in understanding what chiasms are as well as learning how to identify them (as well as give brief explanations on how Hebrew parallelism and repetitions work, pp.32-34).

What is immediately clear is that Clarke has studied the book of Joshua and put in a lot of time researching and interact with the text. His time has led him to believe there are a variety of patterns known as chiasms throughout the book and that these chiasms are actually integral to understanding the “big idea” of the book and how it applies in the lives of Christians today.

So here’s the skinny. Clarke sees the book of Joshua as basically a “handbook” on spiritual warfare. Much of what he writes can be very helpful for Christians to reflect on and learn from. Throughout the book, “big ideas” are placed in brackets and will help those who are overwhelmed by technical points related to the structure. For example, we find Clarke fleshing out of the book of Joshua that:

What I found as most admirable about Clarke’s book is that he does a far better job of holding the tension of a historical-grammatical and a Christocentric hermeneutic. That’s rather hard to do when interpreting the Old Testament. I’ve no doubt that when it is done there are times that we overstep our boundaries. In other words, Christ is seen or typologically pictured when that was far from the original author’s intention. Yet, as Charles Spurgeon once said, “I’d rather find Christ where He isn’t than miss Christ where He is.” A Christocentric typology is seen in reference to Joshua 24:26-27, specifically related to the “stone” that would be a witness against Israel. Clarke writes,

“I wonder: Was Christ in that rock? I’m just speculating and I have no proof. Only the inference from 1 Corinthians 10:4 would seem to support the idea that Christ could be in a rock… If Christ was in the rock in Shechem, then when Joshua culminated the covenant between the Lord and the people, he had Christ as a witness” (p. 205).

Overall I found the book to be interesting, whether I agreed or not. The approach to Joshua is simply fascinating and I’m inclined to think that chiasms are often overlooked, so I’m thankful that Clarke has done his best to take this approach.

So what are my criticisms? Largely they are due to different theological convictions or related to nuancing language a bit.

First, Clarke sets up a difference between the logos word of God and the rhema word of the Lord. This is typical in many charismatic circles, yet it is an unfounded word fallacy (see D. A. Carson’s Exegetical Fallacies). 1 Peter 1:23-25 is one passage that illustrates that logos and rhema are used interchangeably at times, so the differences between the two need to be lexically handled better by charismatics (and remember, I’d consider myself a charismatic!). I would venture to guess that a more biblical approach would be to point out the original author’s intention and what someone believes was prophetically given to them as an insight so that the prophecy can be evaluated and tested in light of the objective truth of Scripture. Perhaps this is semantics, but I really do think that the logos and rhema fallacy gets pressed far too often and tends to give off an idea that there are “deeper” spiritual truths in the Bible and that you just need to be spiritual enough to find them (or take the right medications, in my experience!). I’m not sure if this is helpful and I think it damages the importance of studying Scripture (2 Tim. 2:15).

Second, I would largely disagree with Clarke’s proposal that “if Jericho is rebuilt in some way besides Christ, that born-again believer has lost their relationship with Christ” (p. 118) because I side with the Protestant Reformation in regards to a believer’s standing with God. I believe that Christians who have been regenerated with the Spirit and indwelt with the Spirit will both be preserved by God and will persevere in their faith and trust in/on Christ. So that’s a big theological difference, though I’m sure Arminians and Calvinists are often closer than they may appear (both believe one has to be “in Christ” to experience salvation and that people who are living “in sin” will not experience salvation).

Thirdly, I also see the scope of the atonement as being a bit more focused and effective than Clarke seems to. He writes that “Christ, through His death and resurrection, wants to remove any curses that have been placed on us” (p. 118). I believe that Christ defeated Satan at the cross and effectively did break the curse, specifically of the Law and of sin. Paul writes in Gal. 3:13 that “Christ redeemed us from the curse of the law by becoming a curse for us” and we read in 1 John 3:8 says that “the reason the Son of God appeared was to destroy the works of the devil.” As we scan through the Johannine literature we see an emphasis on the past accomplishment of Christ’s work on the cross. This is also found throughout Paul’s epistles. So I believe I’d draw out what Clarke is saying in a different way. I think what he means is that we need to know that we can experience freedom from certain “curses” through the gospel message, and that God certainly wants us to experience that freedom through the truth of the gospel (death, burial, and resurrection). I think we can maintain that experiential focus while also maintaining the biblical reality of what the atonement historically did accomplish already.

Fourthly, books like this are full of a lot of personal insights and ideas. That’s not a bad thing. And perhaps this isn’t even really a criticism of this work, but a general observation. I believe authors would do well to make very clear distinctions between what is gained through exegesis and what is gained through experience. We shouldn’t pit the two against each other, as many often do. Rather, we should acknowledge both and allow both to function in their respective roles. Joshua’s Spiritual Warfare certainly takes good care of not presenting all the insights as objective facts. In fact, I really appreciated how Clarke was transparent about his personal ideas and opinions in many areas. That was helpful. Yet it might also have been helpful to flesh that out a bit in the introduction of the book. But again, I am possibly being nit-picky because it is certainly clarified that this book takes a very specific approach (chiastic).

Overall, the book was an interesting read and helpful and should be considered when dealing with Joshua and how one applies it in our current context, a time when “we do not wrestle against flesh and blood, but against the rulers, against the authorities, against the cosmic powers over this present darkness, against the spiritual forces of evil in the heavenly places” (Eph 6:12). My objections to certain issues were mostly theological and would require a lot more space to interact with. Regardless of those differences, I’m glad Clarke has taken the time to provide us with a detailed analysis of what he’s found in the book of Joshua!