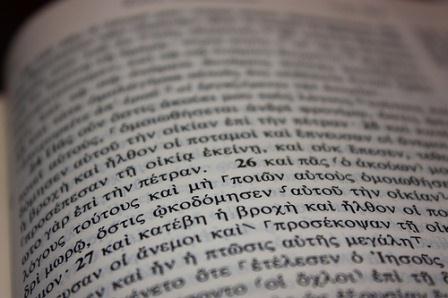 In the preface of my ESV, the following words are found:

“The ESV is an “essentially literal” translation that seeks as far as possible to capture the precise wording of the original text and the personal style of each Bible writer. As such, its emphasis is on “word-for-word”correspondence, at the same time taking into account differences of grammar, syntax, and idiom between current literary English and the original languages. Thus it seeks to be transparent to the original text, letting the reader see as directly as possible the structure and meaning of the original.”

I enjoy the ESV and use it as my primary English translation. I went from using the NIV to the NKJV to the ESV after I spent a year working through Romans and comparing the various English translations with the Greek text. I find it a fine translation and, like I said, use it for my primary English reading. I also enjoy the NLT, so all of you “functional equivalent” folks need to cut me some slack. I almost always consult the original languages when working through passages of the New Testament, so I go into the ESV generally informed. But while I generally enjoy the ESV, I can’t for the life of me understand why they translated Matthew 5:37 they way that they did. The ESV is rendered as follows:

“Let what you say be simply ‘Yes’ or ‘No’; anything more than this comes from evil.”

This is their translation of the Greek, but my issue is how the ESV renders both nai nai and ou ou. I know this is nit-picky, but the ESV’s rendering seems to actually be the opposite of their translation philosophy. The vast majority of English translations follow the Greek and render the text with something similar to “let your ‘yes’ be ‘yes'” or “yes, yes.” Basically, most translations keep the words that are there in the Greek. I guess I’m fascinated as to why so many of us who love the ESV overlook the fact that it is interpretive. I will agree that it’s not nearly as interpretive as The Message or even the NLT, but it is interpretive. I think we would do well to admit this and deal with verses on their own terms or with the overall translation, rather than the usual polemical discussions that leave us sounding as if the ESV is the new KJV for the English speaking world.

That being said, I think the ESV is correct in it’s interpretation! As Morris writes,

“The conclusion of the matter is that it is never necessary for Christ’s people to swear an oath before they utter the truth. Their word should always be so reliable that nothing more than a statement is needed from them. God is in all of life, and every statement is made before him. Your statement will refer to anything you say. I have translated the Greek fairly literally, but the meaning may well be as in REB, “Plain ‘Yes’ or ‘No’ is all you need to say.” That would suit the context. Another possibility is that the words signify much what James says: “Let your ‘yes’ be yes, and your ‘no’ no” (Jas. 5:12), that is, your statement should be thoroughly reliable and thus make an oath unnecessary. Some interpreters suggest that a doubled “yes” or “no” (which is more than the single word) is the limit of what is permissible, but it is unlikely that Jesus would engage in such casuistry, especially when he is opposing that of the Jews.” (The Gospel According to Matthew, p. 125)

So how about that? Not in keeping with the “word-for-word” philosophy, the ESV is correct in it’s interpretation. Doesn’t this seem to add more weight to the use of the NLT? In fact, the NLT translates it as “Just say a simple, ‘Yes, I will,’ or ‘No, I won’t.'” I wonder how many more of these silly little technical details can be found throughout the English translations of the Greek New Testament.

By the way, I won’t be including this information during my message this Sunday because I think the ESV translates it fine (*snicker*)… but so does the NLT.