God Will Wipe Away Every Tear: Interacting with Time Magazine on Revelation 21:4 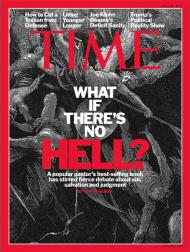 “Every year during Easter season, the news weekly’s like to feature stories that tweak traditional Christian belief (for example, The Gospel of Judas, the tomb of Jesus, etc.). For these publications, Holy Week has become heresy week. I think it says something that Bell’s book has now taken a place next to these kinds of stories.”

The article on Bell and his book goes on to admit that,

“There is, however, no escaping the fact that Jesus speaks in the Bible of a hell for the “condemned.” He sometimes uses the word Gehenna, which was a valley near Jerusalem associated with the sacrifice of children by fire to the Phoenician god Moloch; elsewhere in the New Testament, writers (especially Paul and John the Divine) tell of a fiery pit (Tartarus or Hades) in which the damned will spend eternity. “Depart from me, you cursed [ones], into the eternal fire prepared for the devil and his angels,” Jesus says in Matthew. In Mark he speaks of “the unquenchable fire.” The Book of Revelation paints a vivid picture — in a fantastical, problematic work that John the Divine says he composed when he was “in the spirit on the Lord’s day,” a signal that this is not an Associated Press report — of the lake of fire and the dismissal of the damned from the presence of God to a place where “they will be tormented day and night for ever and ever.”

Many would probably have liked for the article to stop there. Yet the very next paragraph states,

“And yet there is a contrary scriptural trend that suggests, as Jesus puts it, that the gates of hell shall not finally prevail, that God will wipe away every tear — not just the tears of Evangelical Christians but the tears of all. Bell puts much stock in references to the universal redemption of creation: in Matthew, Jesus speaks of the “renewal of all things”; in Acts, Peter says Jesus will “restore everything”; in Colossians, Paul writes that “God was pleased to … reconcile to himself all things, whether things on earth or things in heaven.”

So the Scriptures are presented by Time as contradicting itself. On one hand, some passages are clear that hell is a real place for those who are “condemned” and that it isn’t where you want to be. On the other hand, God is going to redeem all of creation and He will wipe away every tear — not just the tears of Evangelical Christians but the tears of all. The author is referring most likely to Revelation 21:4 (and possibly Rev. 7:17). One reading Time will get the impression that this verse is about all people ever created because the author makes it clear that the application will span beyond Evangelical Christians. Two things can be said here:

(2) The claim that Revelation 21:4 (and 7:17) are to be applied to all people is ridiculous and mitigates against the actual context of both passages. The context of chapter 21 is after the judgment. In fact, the last verse of chapter 20 says that “if anyone’s name was not found written in the book of life, he was thrown into the lake of fire” (Rev. 20:15). Those whom have their tears wiped by God are those who are found as “the holy city” and the “new Jerusalem” which “[comes] down out of heaven from God, prepared as a bride adorned for her husband” (Rev. 21:2). The apostle Paul uses this same analogy in Ephesians 5:22-32 and relates the “bride” to the Church. In Revelation 21:9, an angel tells John that he will be shown the “Bride, the wife of the Lamb” and the context clearly illustrates that this Bride is the people of God.

In fact, one cannot see the contrast any clearer than how John clarifies it. In the same passage, John writes,

“The one who conquers will have this heritage, and I will be his God and he will be my son. But as for the cowardly, the faithless, the detestable, as for murderers, the sexually immoral, sorcerers, idolaters, and all liars, their portion will be in the lake that burns with fire and sulfur, which is the second death.” (Rev. 21:7-8)

All of the promises of the book of Revelation, according to Osborne, are the inheritance for those whom are called the Bride.

The same is true for the context of Rev. 7:17. Read the passage in context:

“… And he said to me, “These are the ones coming out of the great tribulation. They have washed their robes and made them white in the blood of the Lamb. “Therefore they are before the throne of God, and serve him day and night in his temple; and he who sits on the throne will shelter them with his presence. They shall hunger no more, neither thirst anymore; the sun shall not strike them, nor any scorching heat. For the Lamb in the midst of the throne will be their shepherd, and he will guide them to springs of living water, and God will wipe away every tear from their eyes.” (Rev. 7:14-17)

These people who are blessed to have God wipe away every tear from their eyes are a distinct group of people, not just every single person under the sun.

What’s interesting to me, is that as I’ve read and reread Bell, I don’t think he can be accused of suggesting that these verses in Revelation are applied to everyone of all time. It seems that Time has taken some liberty in interpreting him too.